It is highly likely you will be required to create a site to site VPN from your on-premises network to the Azure public cloud. In order to do this you must have a compatible VPN peer that is capable of terminating the IPsec VPN. All of the main network vendors have supported devices such as Cisco, Juniper and Palo Alto etc. You can consult the following website to see what devices are supported;
https://azure.microsoft.com/en-us/documentation/articles/vpn-gateway-about-vpn-devices/
Windows Server 2012/2012 R2 is also a supported configuration with the Routing and Remote Access (RRAS) role installed, this however when I tried to do it behind my Cisco ASA I could not get it to work. If you research around some forums etc most people only get RRAS to work with Azure if it is directly connected to the internet without any kind of NAT in-between. Most enterprises won’t be using RRAS anyway.
This example will cover setting up an Azure vNet with an Azure Gateway that is connected to a Cisco ASA 5505 firewall. At the time of writing Azure automatically generated configuration scripts for Cisco and Juniper devices, although these sometimes need tweaking before they work correctly, I cover this further down. 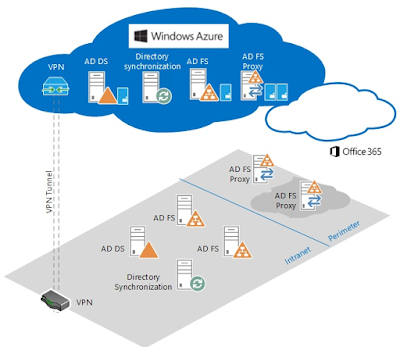 Define Local Network
The first stage is to define the Local Network, which is the network space in which your on premise environment works with. It is with the Local Network you also specify the outside global address that your VPN device has on its outside (or public) interface.
Open the Azure Management console, click New then Network Services, Virtual Network and then Custom Create.

Input a name for the local network, something descriptive is best and then enter the VPN Device IP as stated above. 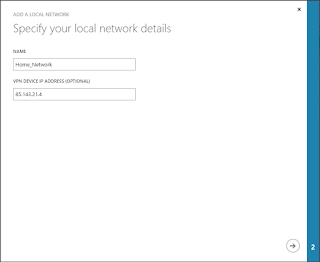 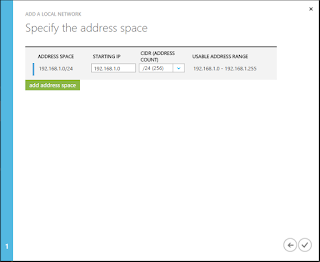 Define DNS Servers
The next step is to define the name resolution servers, you require at least one on premise and in the cloud, click New > Network Services > Virtual Network > Register DNS Server and define the DNS servers.

Enter a descriptive name for the vNet and set the location. 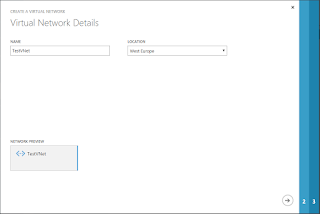 From the next pane click the DNS Servers that were defined in the previous step. Tick Configure site-to-site VPN and then select the Local Network object that was defined in a previous step. 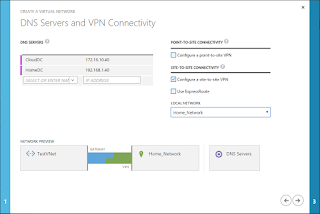 Now configure the address spaces you intend to use for your cloud based instances. Also click Add Gateway Subnet this will provision a small subnet to be used for the inter-tunnel communications. 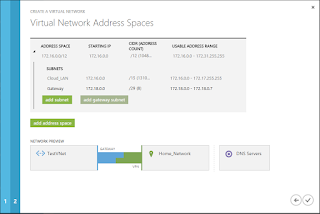 When the network is created the next step is to create a Virtual Gateway, which is assigned a public address. This process can take around 15-20 minutes to complete.  Click Create Gateway and select the Routing type, the Cisco ASA actually only supports Static Routing. Consult the following document to check if dynamic routing is supported for your VPN device
https://azure.microsoft.com/en-us/documentation/articles/vpn-gateway-about-vpn-devices/ 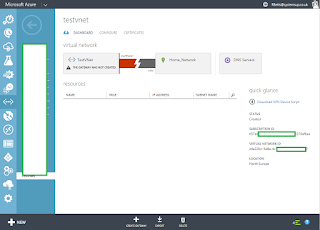 Click Yes to confirm you want to create a gateway.

The interface will appear like it is below, the VPN cannot be formed until the VPN device is up dated with the configuration script. Unfortunately if you do not have a Cisco or Juniper firewall device you may have to do some manual configuration.

Click Download VPN Device Script from under Quick Glance. You can then select what options suit your environment, I hope Microsoft increase the number of devices and operating systems. The current options do not come close to what Amazon Web Services offers, they have pre-created scripts for almost all of the networking vendors I can name, with multiple different operating system versions. 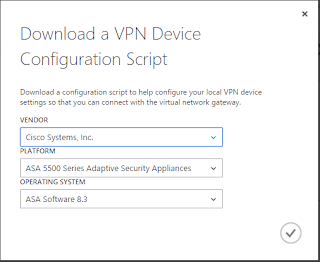 Something that is not obvious when you download the configuration script for the Cisco ASA is that it assumes your firewall's interfaces are called inside/outside, for example some environments use private/public, this is not obvious if you are not a familiar with firewall scripts. I have highlighted everything below that must be changed to reflect your exact firewall configurations.

For example if you see my interfaces on my home ASA are inside/outside so the script is fine for me, but if your interfaces are different you will have to edit the script. My ASA is also running IOS 9.3 and the script is for 8.3, the difference is how the static NAT statement is written.

You can use the ASDM or an SSH session to your firewall to input the script, if you are using ASDM click Tools and Command Line Interface... 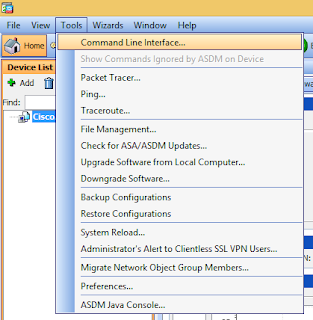 Select Multiple Lines and copy and paste the lines of code into the box, I have found the exit statements in the script get returned by the ASA as none executable code, so I edit them out. 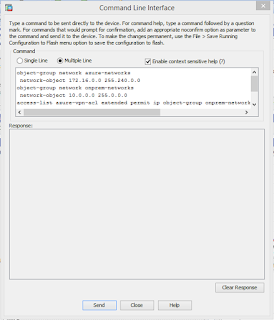 Return to the vNet page and click Connect. If everything has been completed successfully your VPN should form correctly, all of the routes etc should automatically be in place therefore when you ping an on premise server it should get all the way to your Azure instances. 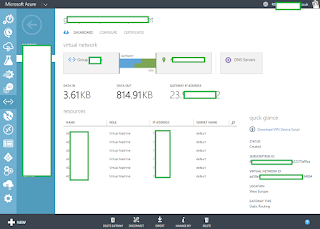