Although it’s possible to terminate multiple VPN (multi-site) into a single Azure vNet, there are some limitation around the VPN hardware you use to do this. The following document from Microsoft outlines all of the supported VPN devices to work with Azure.


If your project requires multi-site VPN, the important column to review here is the Route-based, in short if you want to terminate multiple VPN’s into a single vNet your VPN device must support Route-based.


This is somewhat confusing as Route-based also means Dynamic Routing


The difference between the two is, Policy-based routing encapsulates and encrypts traffic and then forwards it out a specific interface according to an Access Control List. Route-based routing on the other hand forms dedicated tunnels with a neighbouring VPN device and forwards all of the traffic across this tunnel.


The Microsoft documentation to create a multi-site VPN states that the Azure vNet Gateway must be created as a Dynamic Routing gateway, or in other words a Route-based gateway.


This is to allow multiple VPN connection to be terminated into the vNet. If you are using the Cisco ASA for example this will not work, if you check the supported devices list above. The Cisco ASA does not support Route-based routing. In reality if your vNet is configured to use Dynamic Routing and you try and connect it to a Cisco ASA it simply does not work.


In short this basically means that if you have two sites with Cisco ASA’s you cannot create a multi-site VPN to Azure. There is a very small amount of hardware supported for such a topology by Microsoft.


Unless you are running one of the following you basically can’t do multi-site VPN to Azure (these are the only supported device for multi-site VPN);


The “work around” that doesn’t work


There are a number of forums on the Internet listing this exact problem with ASA’s, Palo Alto’s etc. and some people claim the ingenious workaround is to;


·         Create two VPN’s from each of the sites, terminating into their own vNets


I must admit before I did some research on this I did think this could be an option, but again if you review some of the Azure documentation you will notice that for any vNet to vNet VPN you must also create your Gateway using Dynamic Routing. 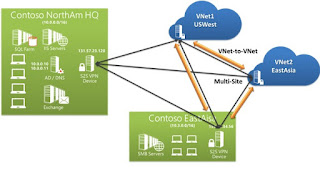 The bottom line﻿
In summary as of January 2016, if you are running a Brocade, Citrix, Palo Alto, WatchGuard, F5, Barracuda or Cisco ASA firewall you cannot create a multi-site VPN to an Azure vNet.
Posted by Ryan Betts at 08:17