SCCM 2012 R2 error "Client Configuration Manager failed to complete the ConfigMgr installation on client "HVCLUST01". In the past 168 hours, CCM has made 175 unsuccessful attempts. The operating system reported error 53: The network path was not found. This was failing because SCCM was trying to push the client to a Failover Cluster object for a Hyper-V Cluster. This is just a computer account that represents the logical cluster in Active Directory. However it was being discovered as a new computer during an SCCM discovery.

The error was not causing any negative problems it was just causing red flags to be logged, which nobody likes. 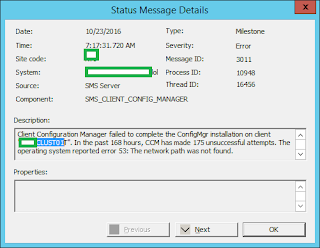 The fix was to put the Hyper-V Cluster objects host name into the excludes servers list in the Registry of the SCCM server for that particular site. Browse to Local Machine\Software\Microsoft\SMS\Components\SMS_Discovery_Data_Manager and open the Registry key "ExcludeServers" 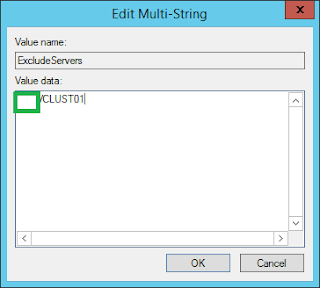